Weather patterns appear to be changing every day. Wet places are now wetter; dry places are now drier; hurricanes and tornadoes are becoming more frequent and violent; and floods and other catastrophes seem more prevalent. We need only look at Hurricane Ida which neared a category 5 storm, the recent flooding in Tennessee, and tornadoes in regions of the country that have never experienced tornadoes to know that things are different. Record rainfalls, for example, are happening across the eastern half of the country. Massachusetts experienced its wettest July on record. And perhaps most importantly, the trendlines suggest that this will continue for the foreseeable future.

We can argue about the reasons for this. Is it global warming, climate change, or just the normal changes in weather patterns that occur over time? In the short-term, does that really matter? What does matter is that these changes in weather patterns have had significant impacts on the health and safety of people across the country, whether in rural, suburban, or urban communities, and regardless of location, be they in the Northeast, Southeast or Midwest. This reality has placed regions across the nation at the forefront of efforts to respond to and mitigate the impacts of severe weather.

Recently, NARC hosted three webinars on the impacts of sea level rise, river flooding, and flash flooding, and how regions are responding to those specific issues.

The Quad Cities, originally made up of four cities–Davenport and Bettendorf in southeastern Iowa, and Rock Island and Moline in northwestern Illinois – have faced increasing rainfall and increased flooding by the Mississippi River (which separates Illinois from Iowa). These floods are destroying valuable farmland, contaminating water supplies, damaging homes and businesses, and causing damage to roads, bridges, stadia, and other public infrastructure. In response to the problems faced by Mississippi River flooding, Bi-State Regional Commission developed a “Resilience and Durability to Extreme Weather Pilot Program.”

The project framework called for creation of an advisory committee, data gathering, analysis that would help determine access vulnerability and adaptation options, determine adaptation priorities, and integrate the assessment into its long-term transportation plan. Bi-State worked with a range of stakeholders including weather forecasters, federal, state, and local transportation agencies, and representatives of airports, railroads, transit, and trails, among others.  Together they analyzed data trends and found that weather and climate changes were responsible for the increased variability of floods, tornadoes, and storms, the frequency and volume of precipitation, and disruptions to transportation networks within the region. They also concluded that the future climate of the Quad Cities will be more like Louisiana and Texas than Illinois and Iowa.

Among the conclusions were that they must learn to live with the Mississippi River. This does not mean acceding to it, but it does mean understanding what is happening and working to mitigate the impacts as best as possible. To move the process along, Bi-State reviewed evacuation sites, public works facilities, transit hubs, rural transit operations, airports, port facilities and railyards; conducted stakeholder surveys and interviews, and held stakeholder workshops to help determine what is critical to the region’s transportation system; and prioritize those for adaptation options.

The final step was to incorporate these findings and conclusions into their various transportation planning processes to achieve resilience informed planning.

Like the Bi-State Regional Commission, the Tampa Bay region faces major challenges to its infrastructure due to water. However, in the case of Tampa Bay, the threats are due to sea level rise and storm surge. Either or both can have devastating impacts on the region, its people, and its economy. Located on the west coast of Florida, Tampa Bay is an area that often experiences severe weather, and sea level rise combined with storm surge is particularly problematic.

One goal of the study was to conduct a regional vulnerability assessment of the roadways. The findings were incorporated into the Long-Term Regional Transportation Plan in response to the requirements of the Fixing America’s Surface Transportation (FAST) Act. But it was also to provide data so that other resiliency efforts including hazard mitigation and community vulnerability studies could be completed.

The importance of this effort cannot be underestimated. The Tampa Bay region has 2.8 million residents, making it the second largest region in Florida and the 17th largest metropolitan economy in the nation. It has more than 1,000 miles of shoreline, and an astounding 58 percent of the population live in flood zones, as compared with five percent nationally.

Using nine different scenarios (including category 1 and category 5 hurricanes, and 33 inches of rain), the TBRPC projected that anywhere from more than 1,000 lane miles of roadway to almost 6,000 lane miles could be impacted by these different scenarios. To address these impacts TRPC made several recommendations. Among the adaptation recommendations were to raise the road profile, enhance drainage, protect road medians, attenuate wave action, improve seawalls and revetments, and create living shorelines that can help reduce the overall impact of sea level rise and storm surge. The cost of these adaptations, however, is significant. While Hillsborough County would experience a modest increase from $650 million to $700 million, Pinellas County costs would skyrocket from $102 million to $880 million. By no means a modest investment. But the cost of doing nothing ultimately would cost far more.

The area of Texas served by the Deep East Texas Council of Governments (DETCOG) is one of the largest rural regions in the nation. At more than 10,000 square miles, it is larger than six states. The region also has always been economically distressed, and the populations of nine of the 12 counties have declined. Moreover, it is an area prone to disasters.

Over the past several years, DETCOG has faced significant flash flooding. Several years ago, Hurricane Harvey dropped 28-30 inches of rain on Sabine County alone. Roads flooded at 125 of 275 creek crossings making the roads impassable. As a result of Harvey, however, the region received $11.2 million from the Community Development Block Grant – Mitigation Program. The grant will go to 10 cities and five counties and will enable the region to replace 19 bridges or culverts, elevate road grades and make drainage improvements to help reduce the possibility of flash floods. However, this effort will still leave 496 miles of county and US Forest Service roads in some level of disrepair. And the problems caused by flash floods have not ended. Last year, Hurricane Laura brought heavy rains over long periods of time resulting in flash flooding throughout the region. Fortunately, Hurricane Ida did not impact the region.

The search for solutions to reduce the incidence of flash floods goes on. While the expansion of broadband throughout the region and the expansion of emergency interoperable communications will not eliminate flash flooding, it will go a long way to ensure that residents of the region are fully aware of weather conditions and specific areas of flash flooding while enhancing the ability of police, fire, and other emergency workers the ability to communicate more effectively during emergencies.

Of course, these three regions are and are not unique. While their specific water-related problems may differ, the fact remains the same in each region: they are experiencing an abundance of water that is unwelcomed. And even though the specifics of the water-related problems may differ, the solutions–assessment, mitigation and prevention remain constant across all three regions.

Finally, one important note: each of these regions is experiencing fluctuations in weather patterns. That is the norm almost everywhere. Each, however, is also the victim of climate change–long term changes in weather. In the Quad Cities, it is documented increases in rainfall which have added significantly to the amount of water in the Mississippi River, thereby creating enormous floods that have been and will continue to be disruptive of the local economy. In the Tampa Bay region, rising sea levels caused by melting glaciers and storm surge caused by ever more violent storms, ensure that the problem is not going to go away very soon. And in Lufkin, Texas, changes in the way storms develop and move have resulted in increased rainfalls, which has, in part, caused the dangerous and unpredictable flash flooding the region is experiencing.

The Senate approved historic spending in the Infrastructure Investment and Jobs Act (IIJA) – a $1.2T bill that reauthorizes the nation’s surface transportation and drinking water and wastewater legislation and pours additional billions into new programs in transportation, energy transmission, resilience, broadband, and many others. NARC has conducted an analysis of much of the bill which is presented in two parts: a summary analysis of the provisions most applicable to metropolitan and regional planning organizations and a chart with an analysis of all of the transportation-related sections and most of the additional new spending contained in the IIJA.

The bill’s $1.2T includes approximately $550B in new spending; approximately half of that new spending goes to the U.S. Department of Transportation. The IIJA would also provide billions in funding for energy transmission infrastructure, resilience, broadband, and many others. The result is higher funding levels in some existing programs and the creation of many new programs as well.

In total, the U.S. Department of Transportation (USDOT) will receive $567.5 billion from the BID. Of that amount, $293.4B is “baseline” spending (the level of spending from the current reauthorization bill, the FAST Act). That means USDOT will receive $274.1 billion in new spending authority, which is almost exactly half of the $550 billion in new spending that the BID contains overall. Of that $274 billion, $90 billion is provided as contract authority through the reauthorization bill. The other $184 billion in new spending is provided in “guaranteed appropriations” – funding that is outside of the HTF funding structure, in some cases to provide additional funding for existing programs and in others to create new programs. 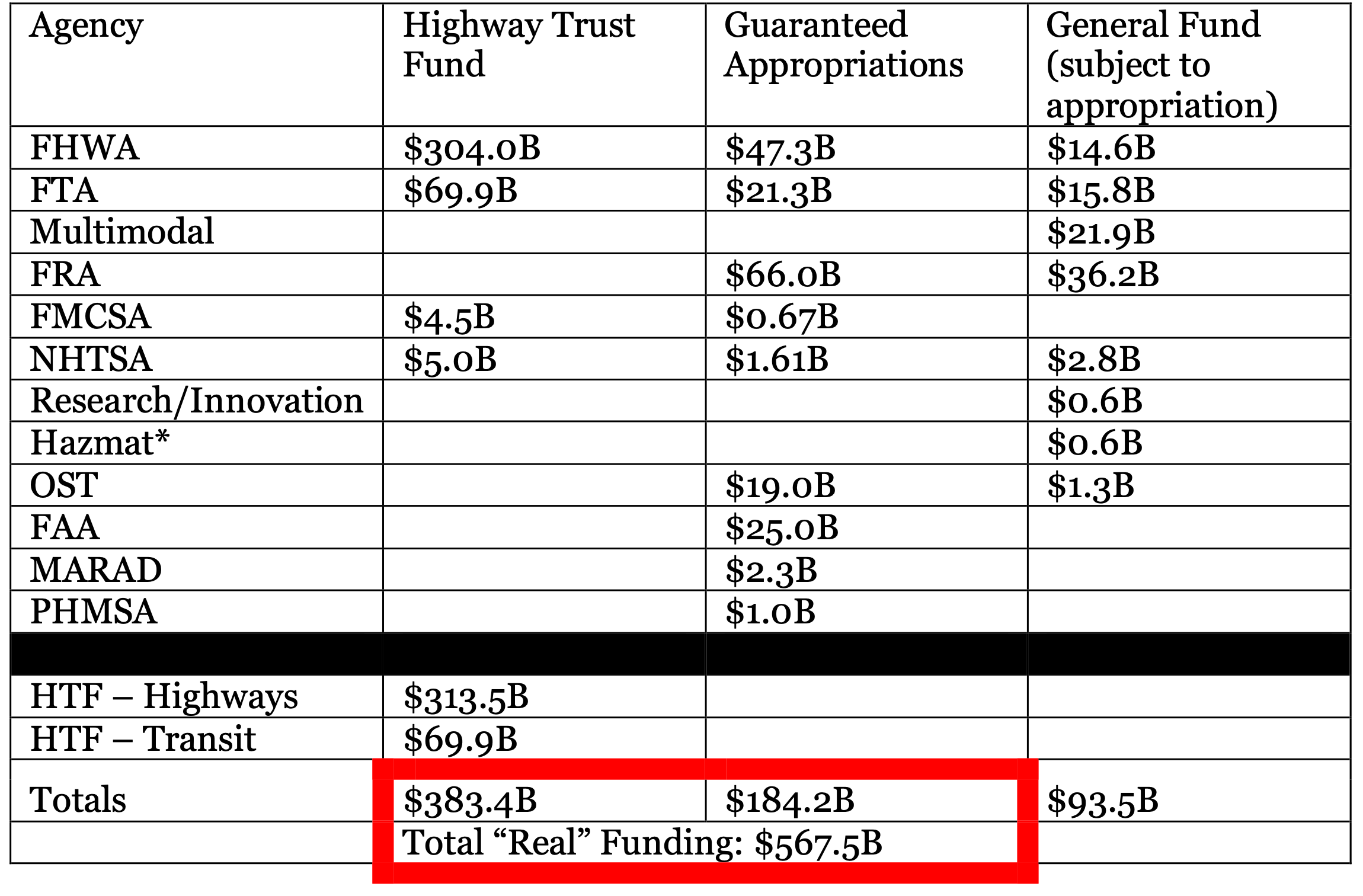 For more information about the funding included in the Bipartisan Infrastructure Deal:

Please direct questions about the IIJA to Erich Zimmermann, Deputy Director/Director of Transportation Programs at erich@narc.org.